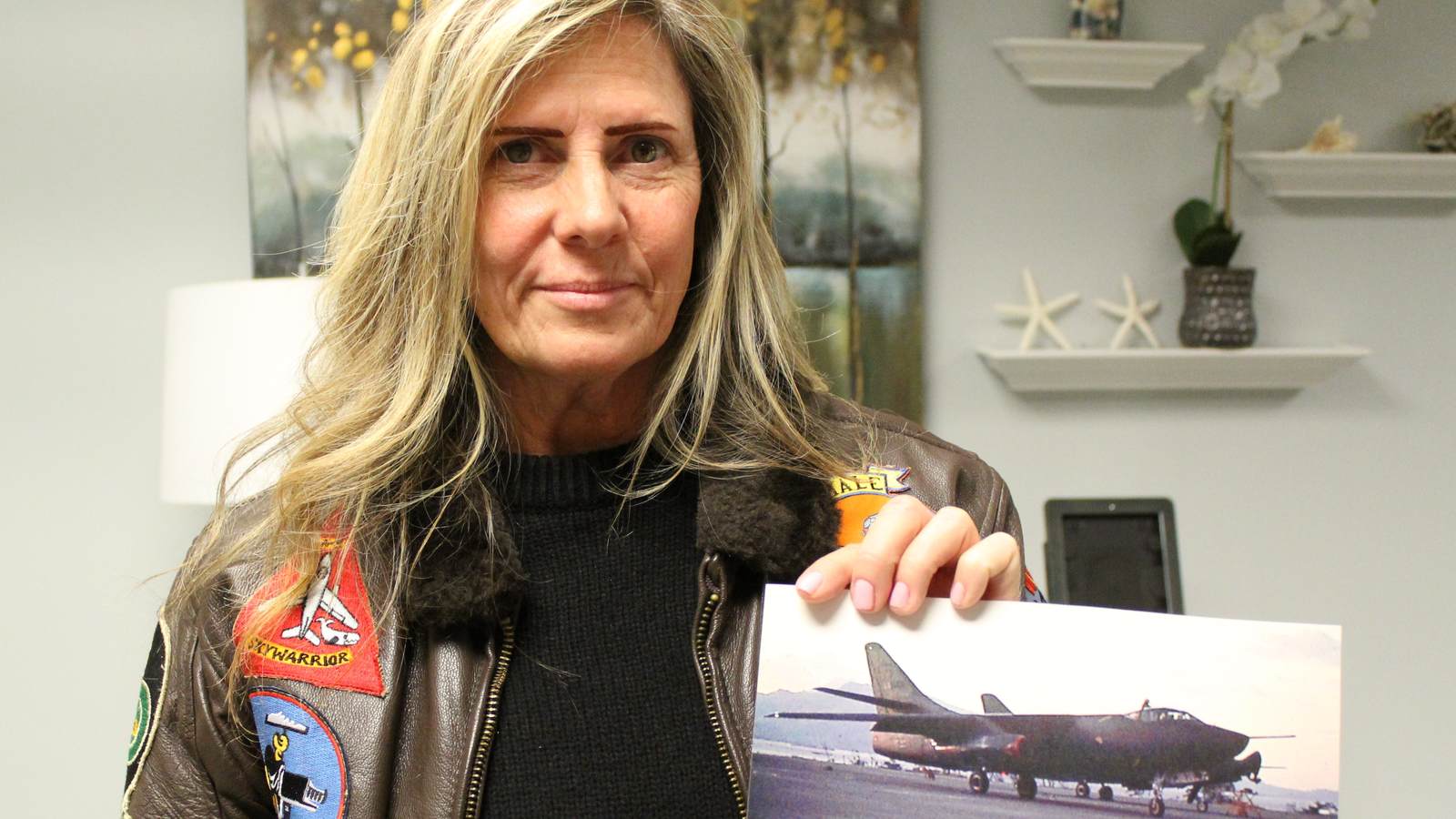 Walking into the USO Fallen Warrior Family Room at the Norfolk International Airport (ORF) in Norfolk, Virginia, is never an easy task. The very thought of why the room is necessary conjures up deep sadness. But the room itself is calming and comfortable with muted coastal colors.

Sofas, lamps, side tables, and easy sitting chairs are what might be found in any average American family home. On the far side of the room is a table much like a dining table with a hanging light fixture that, on this day shining with soft, white light on a display of Vietnam-era service member memorabilia. It is the kind of exhibit that brings chills to the skin given the topic of the day’s interview.

Practically every square inch of the table is filled with maps, letters from home, a Navy flight suit with Commander rank, a Navy flight helmet, and survival gear. Standing beside the table describing all the memorabilia from decades past is USO Hampton Roads and Central Virginia (HRCV) volunteer Mrs. Jeanie Huffman and her husband, ORF Police Chief David Huffman. Mrs. Huffman has been at the ORF USO Center volunteering for special events for three years. During her time there, she has had a unique connection with the airport and the USO. 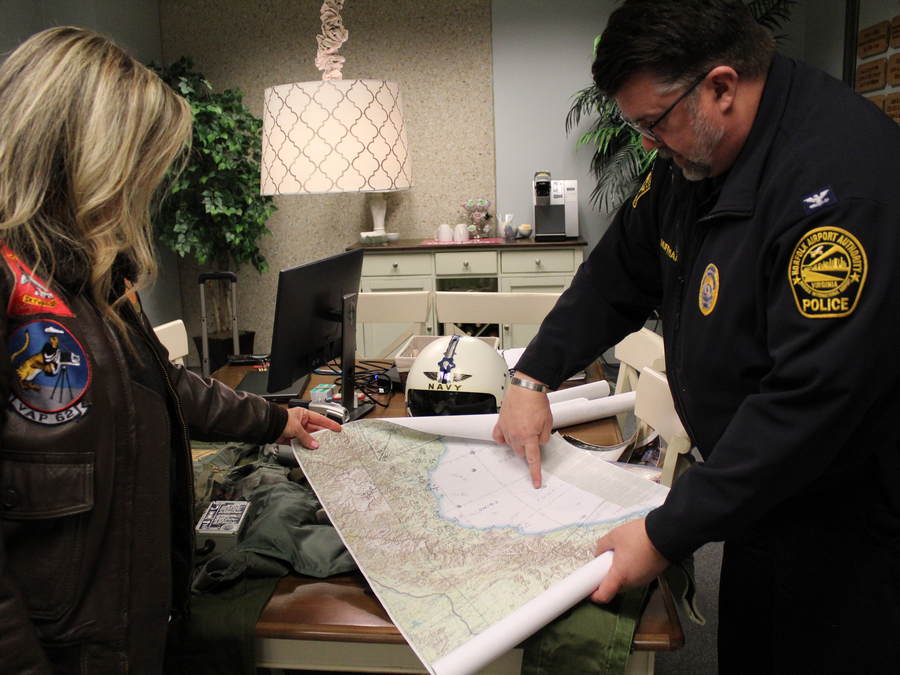 On August 25, 1967, at approximately 1350 Zulu (9:50pm local time), Mrs. Huffman’s father, Commander (Cmdr.) Edward James Jacobs, Jr., went missing in action while piloting his RA 3B SkyWarrior airplane (call sign Quiz Show Zero-Niner) along with two other crew members while on a night reconnaissance mission over Vietnam. When Jacobs left for the Vietnam War in April 1967, his infant daughter, Jeanie, was just two weeks old and the youngest of seven children. On the date of his disappearance, she was still only five months old. Mrs. Huffman never had the opportunity to meet her biological father, but through daily letters to home from his combat deployment, she was able to see glimpses of his life and learn more about him.

Chief Huffman began his intrigue with Missing in Action (MIA) service members while still in high school in Norfolk writing a paper for class when he interviewed a local Gold Star mother. Her son was a U.S. Marine Corps Captain who was lost in May 1972. The story itself made a huge impact on his life and he has worn the Captain’s MIA bracelet ever since. That love and hobby would ultimately make a connection with his wife, Jeanie Huffman, when they met eight years ago. Now with a blended family, the husband-and-wife team started to delve deeper into her own father’s disappearance. 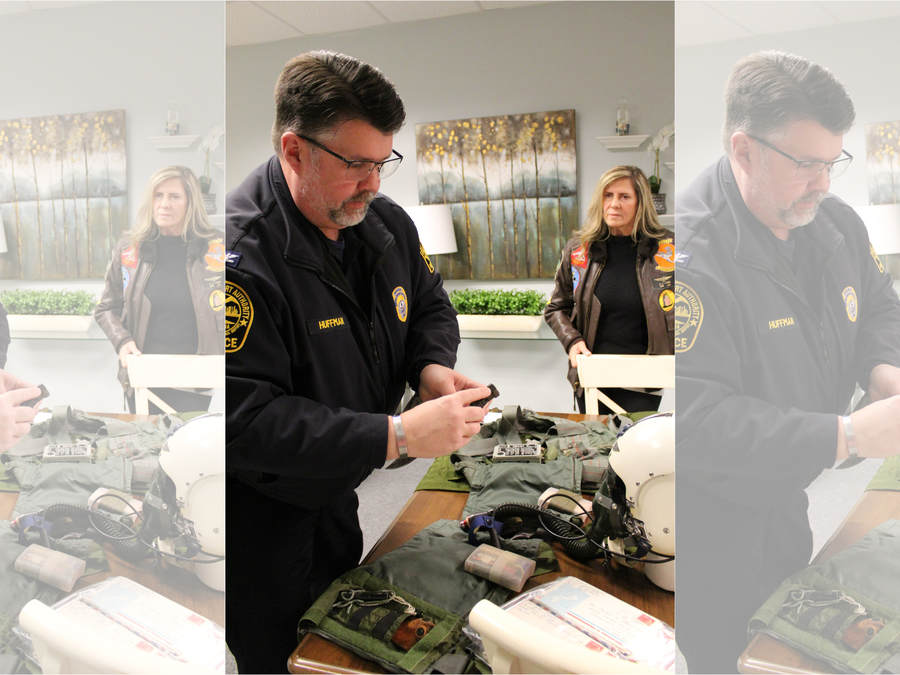 Chief Huffman explains the artifacts he has collected over the past three years that Commander Jacobs would have been wearing at the time of his disappearance. | Photo credit Beth B. Miller

Over the last three years, the pair have managed to find nearly every item that the missing Jacobs would have worn during his time in uniform on the deployment to Vietnam, Thailand and the Philippines. Chief Huffman has been able to find maps and information relating to Jacobs’ last mission and can with an educated guess pinpoint where his plane most likely went down. They believe the aircraft is located near an island off the coast of Northern Vietnam called Hon Me. The flight left from Cubi Point, Philippines, and was tasked with taking pictures of possible targets for follow-on intelligence and mission execution, but never returned. They are not sure if Jacobs’ plane was shot down or if it had a mechanical failure. 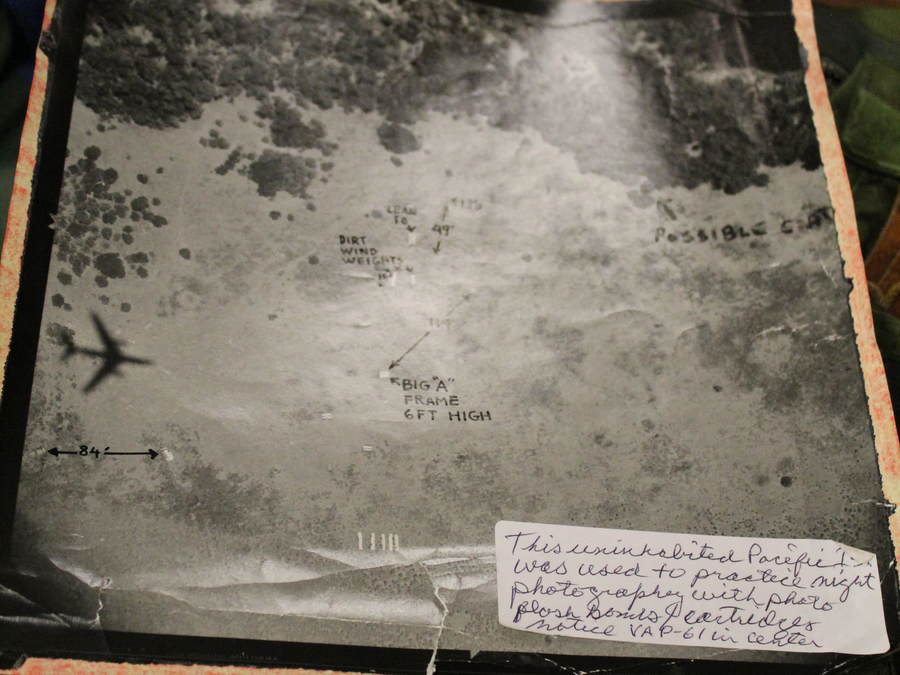 This is a training flight picture taken on a previous mission by the air crew with Commander Jacobs. | Photo credit Beth B. Miller

Nearly 100 letters were found in a box in the back of her mother’s closet after her step-father passed away and these letters reflect what was happening in the last few months of her father’s life. Through his own words, Mrs. Huffman has been able to get to know the father she never knew growing up. “It’s brought me so much closer to knowing who he was and what he did,” she said. “In the letters they were writing back and forth, he even wrote down what he was having for breakfast, so I know what he liked and what he drank.”

Mrs. Huffman does not see any resemblance of herself in her father’s characteristics. However, in a moment of levity, Chief Huffman said he sure does. “From reading the letters, I can say that she has some of her father’s traits. Her father was very organized, very detailed, very neat and she’s all that,” he said. 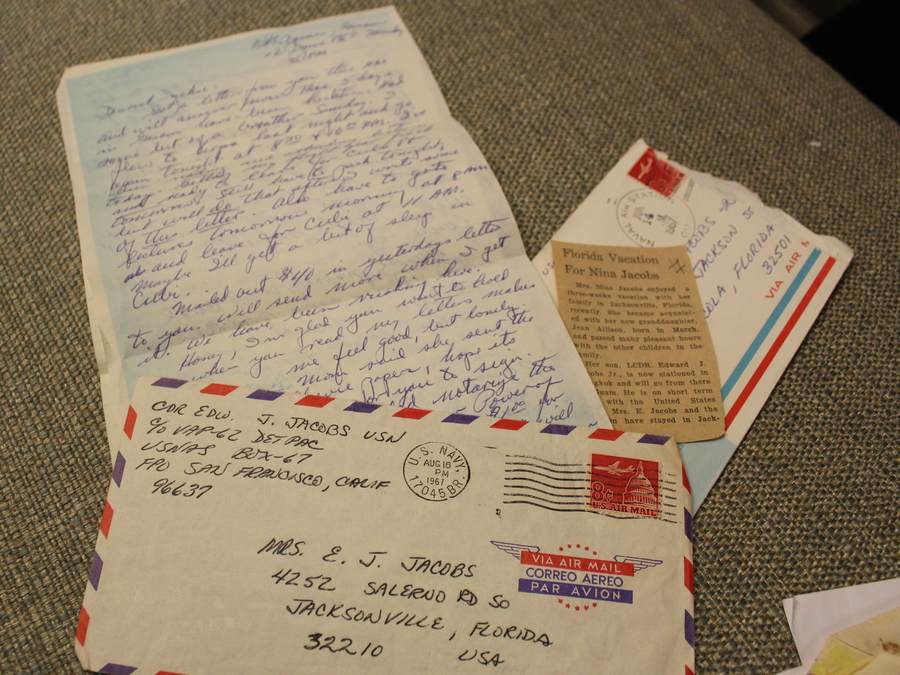 Letters from CDR Jacobs to his family back home in 1967. | Photo credit Beth B. Miller

Those organizational skills have paid off. In September 2021, Mrs. Huffman filled out a First Amendment application to set up a POW/MIA display in the main lobby at ORF for National POW-MIA Recognition Day which included a ‘Missing Man’ table. She stood there for four hours to tell others about the significance of the table. Len Friddle, USO ORF center operations supervisor and U.S. Navy retired Captain, saw the display that day and knew he had to have one. During that POW/MIA day at the airport last year, Friddle brought the POW/MIA flag down from the USO center and let them use it for display, said the Chief. “It’s a great working relationship.”

“It has always been a passion of mine to have one in our USO center here,” said Friddle. “When they set up the one in the atrium last September, it lit the fire in me and I wanted to make sure it got done,” he said. Since Mrs. Huffman was a volunteer at the center, Friddle said he would pay for everything if she would set it up. 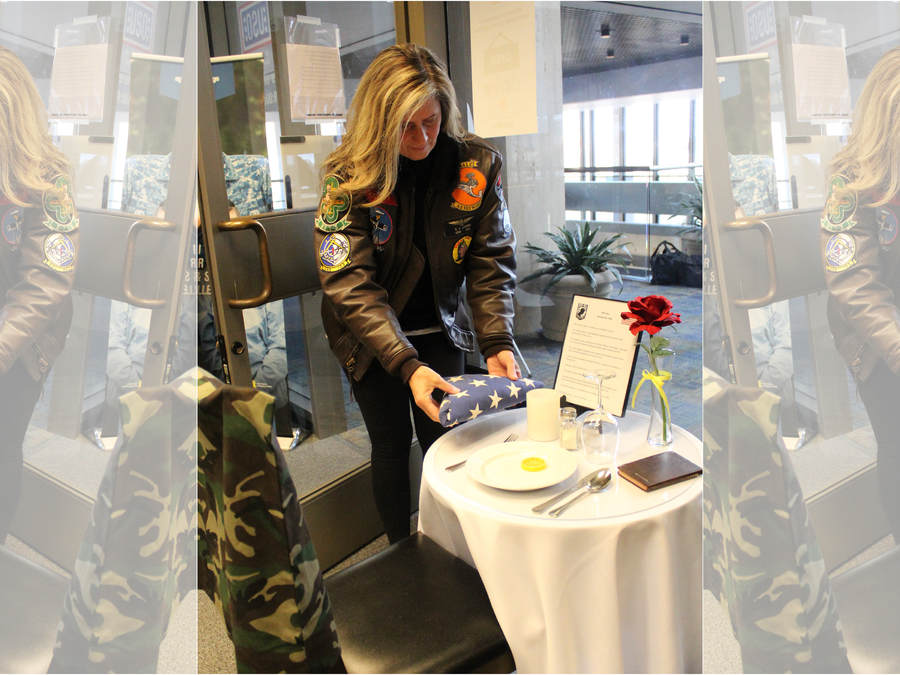 Mrs. Huffman agreed to do it, but she said she wanted to do it herself as a donation for the center and would not take any money. “I never thought of myself as a Gold Star daughter,” she said. “I just try to stay humble and keep his story alive.”

Last Fall, Chief Huffman sent a request through the airport administration recommending that ORF fly the POW-MIA Flag as a reminder of all those still missing and unaccounted-for. The board of directors approved the request with the support of the administration. On October 15, 2021 the POW-MIA Flag was hoisted up the main flagpole under the American Flag by the Honor Guard of the Norfolk Airport Authority Police Department. Mrs. Huffman also set up a Missing Man table for that ceremony and momentous occasion.

Mrs. Huffman, wearing a recreation of her Dad’s leather flight jacket with his actual unit patches, later went on to say that she has learned so much about her father, but right now, the focus is just to bring him home. “That’s what I have left to do.” 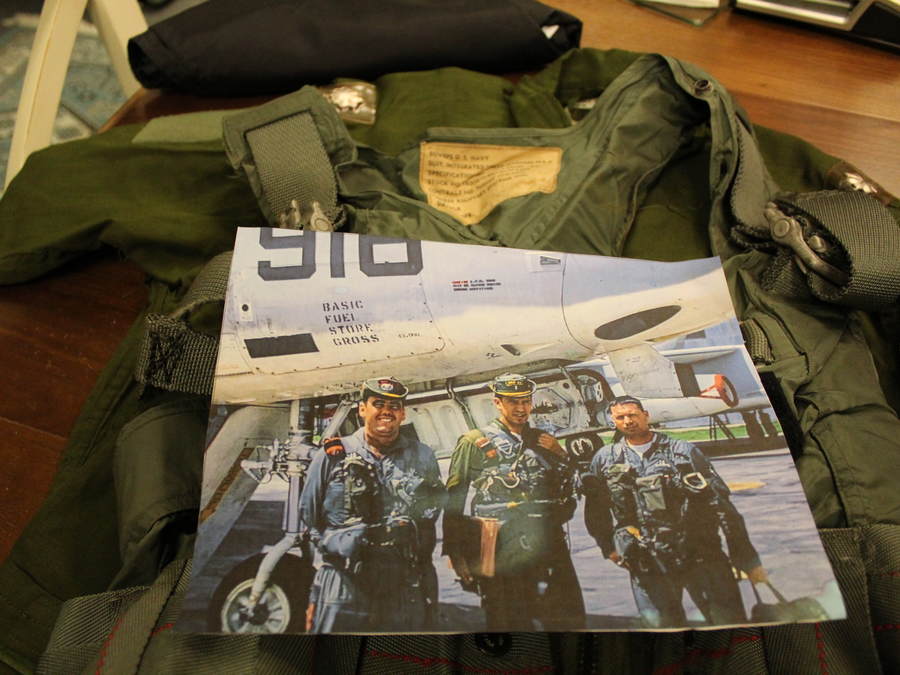 Both of the Huffmans volunteer for the National League of POW-MIA Families. According to Chief Huffman, there are still 1,582 missing service members from the Vietnam War. The other two crew members lost with Jacobs are Lieutenant Junior Grade James John Zavocky (photo navigator) and Petty Officer 1st Class Ronald Alan BoisClaire, Sr. (photo crewman).
In recognition of this National POW/MIA Recognition Day, it is important to never forget the fallen and those still missing and unaccounted-for in the service of our nation.